As the year comes to a close, I thought I would share this video as my last MKF Group Blog post of 2011. The video touches on my mAss kickin' journey since my diagnosis of a brain tumor in September of 2007 and how in the grand scheme of things I am changed for the better. The biggest change since my diagnosis was shifting my mindset from the underdog perspective to using what I have experienced and learned to help others - thinking bigger than just my individual diagnosis has made a world of difference in my perspective and attitude.

After re-herniating and rupturing discs in my lower back last fall and eventually having surgery to repair the damage in the spring, I expected 2011 to be a year dedicated strictly to recovery. However, my year of recovery turned into a year of discovery. Although I didn't even realize it at first, I spent my newfound free time away from sports and socializing reevaluating myself.

- You only get once chance to get things right; make this life one worth living

- Life is a class, make sure you put to use what you're learning (outside of the classroom)

- You can always turn a negative situation into a positive. Things can always be worse, much, much, worse

- Everything happens for a reason, even if that reason isn't apparent or doesn't become apparent until years down the road
Posted by Catherine at 3:45 PM No comments:

Mumford & Sons, Awake My Soul
Sigh No More 2010
Lend me your hand and we'll conquer them all
But lend me your heart and I'll just let you fall
Lend me your eyes I can change what you see
But your soul you must keep, totally free

Navigating Cancer is a community of cancer survivors, caregivers, professionals, friends, and family who support one another, share their experiences, discuss relevant topics, and contribute helpful resources. The MKF Group Blog received the Inspirational Cancer Blog award recently, and is now listed as a blog reference source for: brain cancer, breast cancer, cervical cancer, testicular cancer, thyroid cancer, and lymphoma information and support. From what I have gathered, like many other tumor/cancer resources, Navigating Cancer’s main function is to develop support systems and provide situation specific information.

From a community standpoint, Navigating Cancer is home to over 740 users with 35 diagnosis specific groups, not including subgroups. Users can join groups that are specific to their needs and interests where they have the option of participating in discussions with other patients, survivors, and supporters. These groups beyond diagnosis specifics range from patient empowerment to support for the supporter, nutrition during treatment, and more.

Most of the resources available through Navigating Cancer can be found in the Navigating Cancer Library, which focuses on three stages of information: understanding, treating, and monitoring. These resources are organized by diagnosis and include articles as well as links to other websites and blogs which are added by users, groups, and clinics. Users can also keep track of their symptoms, side effects to treatment, and progress in an organized fashion. There is even a handy calendar option where users can keep track of their appointments. Navigating Cancer is pretty cool!
Posted by Catherine at 5:44 PM 1 comment: 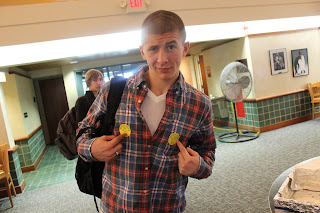 
A quick follow up to the original bale sale post...
I tried videotaping the mob of students that rushed our table of baked goods, but my camera battery unfortunately did not have enough juice left to take a video. I did have enough battery left to snap this snazzy picture of my friend Nick before the mob descended though! Imagine how excited puppies get when you offer them a treat (they jump up and down and flip out). My peers act similarly during bake sales..haha! The bake sale took place around 10:30am, but the early morning timing (anything earlier than 1pm is early for high schoolers!) did not stop students from emptying their wallets for a good cause and filling up their bellies with sugary delight. After they made their purchases, they went back to class, hyped up on sugar and armed with TUMORS SUCK! stickers to put up around the school. My Dad made his famous red velvet cupcakes with cream cheese icing which were a big hit along with chocolate chip cookie bars and double mint chocolate chip cookies. With the help of a few friends and my Dad, we baked our way to earning an honorable profit for my fundraising page in honor of the Holiday Drive.
Posted by Catherine at 5:42 PM No comments:


Ebb & Flow - Storytelling For Cancer Survivors from Hands On Films on Vimeo.
Posted by www.mAssKickers.org at 11:56 AM No comments: 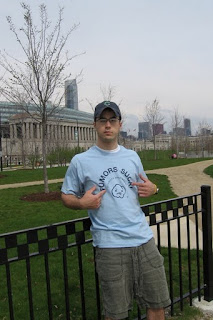 My name is John Abbate.
I was a junior at Indiana University in Bloomington, Indiana. I was a "good" student majoring in secondary education...and was very involved in the Little 500 bicycle race...maybe you have seen the movie "Breaking Away"...well,it is sooo worth seeing.
One night in late February of 2007 I was at the library late again (class & riding my bike...etc cut into my day) I was walking from my car to my apartment, slipped on ice fell backwards & hit the back of my head. I did not think much of this,I kind of laughed it off and was feeling concussion symptoms, but not at all what was really going on. Feeling a bit woozy or concussed,I did not go to bed right away.

Waking up the next morning was not too bad...I had a headache, but I went along with my day. Legend exists among some family & friends that I rode like 100 miles, but that is BS...I rode 30 miles & felt better actually. Slowly, but surely the headache came back. Friday turned to Saturday & I felt weak...too say the least...I tried riding the bike,usually that was a form of therapy for me,well I rode a bit & finished an easy 15 miles,but felt awful. So, I wake up Sunday, I am really struggling by now manage a shower then I drove myself to the E.R. (I did not tell my roomies...sorry guys)

I have a few tests ran on me & long story short they had found a low grade astrocytoma on my brain stem,some of the cerebellum that had been growing for 6 or so years.  (Dr's always told me symptoms were sinus related) The walnut sized tumor was smack dab in my fourth ventricle. So, my brain was essentially drowning in CSF (cerebrospinal fluid) and I had two neurosurgeons saying if they did not operate within a week,I would possibly comatose & die. Anyway, the fluid that should have been draining was backing up because the fall had "jarred" the tumor blocking the CSF flow.
This is heavy stuff for a 22 year old.  Well, talk about a quick decision. I decided on a different Doctor @ Northwestern in Evanston, Ill.

March 2nd of 2007 I had surgery, stayed @ the R.I.C. (Rehabilitation Institute of Chicago) for almost 3 months. I came home June 15th of 2007 as an entirely different person...well, physically anyway. (be your own advocate, try not to be ignorant to warning signs, I kind of was) In August of 2008 I managed to get back to school @ a local campus...IU Northwest. Fast forward to December of 201, it has been a rough road to say the least,I am almost done with school and am already thinking about grad school(I am excepting donations...jj...ha) I have accomplished some pretty "cool" things in my wheelchair and I am just getting started/ trying to break away from stereotypes that disability is a "bad" word.
Posted by Road 2 Recovery at 7:21 PM No comments:

THANKS FOR MAKING 2011 A GREAT YEAR FOR MASS KICKERS FOUNDATION! We are planning exciting, fun events for continuing our campaigns in 2012.  We are also planning two new unique events in 2012. See our awesome plans below, but WE NEED YOUR HELP!! Organizing these super fantastic things cost money and we need some to keep up the mAss Kicking momemtum going!

Spring 2012 - "The mAss Kickers Charity KICKBALL Tournament" in San Diego. Have fun helping us Kick some mAss! Spaces are limited to 12 teams. Look for updates on the website soon!

Summer 2012  - in San Diego: "The RIC, Research Is Cool Seminar" for patients and loved ones! There are a lot of organizations that support tumor/cancer research. We want people to understand it AND use it! The seminar explains what research is, how to participate, and the benefits of participating in research studies. THIS WILL BE A UNIQUE TAKE ON RESEARCH! Website coming soon!

October 25 - in San Diego "International TUMORS SUCK DAY Celebration" Let the world know you think TUMORS SUCK! PLAN A GET TOGETHER WITH YOUR FRIENDS LET THE WORLD KNOW THAT TUMORS SUCK! https://www.facebook.com/pages/Tumors-Suck/145877928814836?sk=wall

We have a very ambitious 2012 planned and we need your support to host these events! Please consider a tax-deductible donation to mAss Kickers Foundation. The funds raised from this drive will support our 2012 activities AND fund tumor/cancer related research.
PLEASE BOOKMARK OUR WEBSITE: http://www.mAssKickers.org HELP US KICK SOME MASS IN 2012!!! JOIN IN THE FUN!  MAKE A DONATION AND WE'LL HELP YOU CREATE YOUR OWN PAGE! PLEASE PASS THIS ON!!!
Posted by www.mAssKickers.org at 8:20 PM No comments: 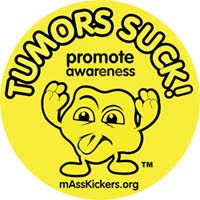 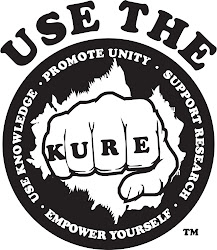 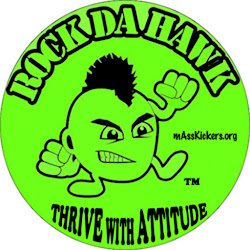